A Cathedral And A Motet

The Wall Street Journal has an excellent article about the construction of the Santa Maria del Fiore cathedral in Florence, often called more simply the "Duomo", which is one of the most remarkable and beautiful pieces of architecture ever created. 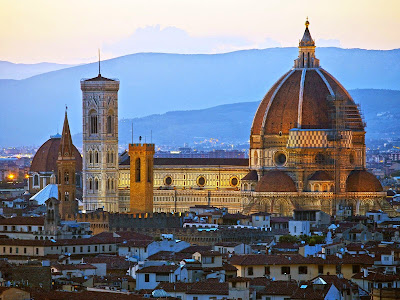 Click to enlargeThe WSJ comments:
The cathedral’s 140-foot span was so wide that traditional methods of covering it were inapplicable. ...Brunelleschi set out with his friend Donatello to Rome to study its ancient structures, especially the Pantheon, with its own huge dome. He found that the Pantheon’s designers had employed some clever techniques, counteracting the natural forces of push and pull (downward and outward) on its vault by making the walls thicker where the stress was greatest, at the base. Higher up, they used lightweight materials, including concrete, to create a double-layered dome that got thinner as it rose, allowing it to bend and curve. He collected these ideas, added some of his own, and returned to Florence. ...once the project was under way, Brunelleschi’s inventiveness seemed unbounded. He created a floating platform on beams cantilevered from the dome’s base that rose nearly 197 feet above the ground. He designed a double-layered dome with hidden circular chains of stone, iron and wood for support. He instructed the workmen to lay bricks in a unique herringbone pattern, with larger bricks interrupting smaller ones at right angles, to create a more solid bond, and invented machines to facilitate the project, like a magna rota or “great wheel” to lift materials, and a new kind of tower crane called a castello to move them at great heights.Most remarkably, and the reason I am posting about this today, is that the inventiveness of the architecture was matched by a musical composition commissioned to be performed at the 25 of March 1436 consecration of the cathedral, Pope Eugene IV officiating.

To understand something about how the piece of music, titled Nuper rosarum flores by Guillaume DuFay, is in its way as remarkable as the cathedral itself, I have to introduce a couple of musical terms. One is talea which refers to a rhythmic pattern; and the other is color, which refers to a melodic sequence. A talea is repeated a number of times and so is a color, but what is interesting is that they are normally not the same length. In a typical example, the talea might consist of four durations and the color of 28 pitches so before the melody has finished, the talea will have been heard seven times. A piece, such as a motet for voices and instruments, using this kind of structure is called an isorhythmic motet (isorhythmic means "same rhythm") because of the repeating rhythmic pattern.

But what DuFay did in Nuper rosarum flores was no mere isorhythmic motet. Oh no. The piece is actually a mensuration canon, meaning that when the talea repeats, each time it is in a different meter! The four different meters used are 6/2, 4/2, 4/4 and 6/4. This technique is used in the lower voices, the tenors I and II. The upper voices are a freely written duet that make use of certain thematic material over and over and are therefore described as isomelic, meaning "using the same melody". The quite good Wikipedia article on the piece has this illustration that may help: 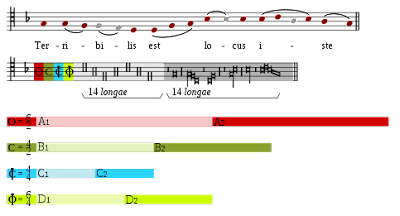 Structural plan of the motet and its tenor. Top: Pre-existing Gregorian cantus firmus; middle: Tenor in original notation, with four mensuration signs defining the diminution scheme; bottom: Total structural scheme: Through fourfold repetition of the tenor at different speeds, the motet has a structure of 4x2 parts, with length proportions of 6:4:2:3.

Or it may not! This is an extraordinarily complex piece and a unique one. Analyzing it in enough detail to fully understand how it is put together is a very large project indeed. So instead, let's just listen to it:

The upper voices are sung and the lower ones played by brass instruments. The score is rather complex as well. At first you will hear just the two upper voices, though you will see a score with four staves. This is because the tenors have a lot of rests at the beginning. Later on little red boxes will identify which staves are actually sounding. Enjoy!