Grigory Sokolov, Ready For His Close-up?

I find that these days, with politics and popular music beyond any possibility of satire, that you have to look in some unexpected places to find something really suitable for the satiric treatment. I have an item going in tomorrow's Friday Miscellanea, but it really deserves a stand-alone post. The inspiration is one of those big, beefy New Yorker articles, this one on pianist Yuja Wang. She is a fine pianist, of course, but the 21st century being what it is, the article takes some bizarre twists and turns. For one thing, it is headed by this spectacular photo: 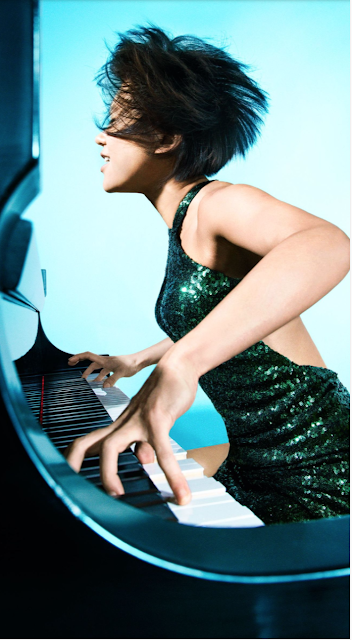 Wow, now that's some photo! Here is how they describe how it was shot:
We were on a below-street-level floor, filled with pianos. The photographer, Pari Dukovic, and his three assistants were placing lights and screens around one of them. They had been there since eight-thirty in the morning (catering and hair and makeup had followed at eleven-thirty). Several of Yuja’s concert dresses were strewn around an alcove serving as a dressing room, among them the blue-green dominatrix gown she had worn to play the “Hammerklavier.” This was the dress finally chosen for the portrait. The hair-and-makeup man, with whom Yuja had established laughing rapport, revised something in her hairdo at her request. “My cheeks are too fat,” she said as she looked in the mirror. She ate a few forkfuls from a plate of salad that her friend Carlos Avila, a pianist who teaches at Juilliard, brought her from the catering table. Then she slipped into the blue-green dress and stepped into stiletto heels, and the photo shoot began. Yuja went to the designated piano, and Dukovic—a handsome young man, with a warm and charming manner—began circling around it, snapping pictures with a handheld camera, as she played bits and pieces of repertoire. At first, she played tentatively and quietly, starting a piece and trailing off—and then she worked her way into a horrible and wonderful pastiche of Rachmaninoff, Chopin, Beethoven, Mozart, Gershwin, Horowitz, Tchaikovsky, all mushed together, playing louder and louder and faster and faster, banging with mischievous demonic force, as Dukovic continued his circling and snapping, like the photographer in the famous orgasmic scene in “Blowup.” Yuja ended with a parodic crescendo as Dukovic shouted, “I love you!” and she burst into laughter.The arresting photograph that was chosen out of the hundreds, possibly thousands, of pictures Dukovic took of Yuja at the piano and, later, in the first-floor showroom, posed full figure in front of a piano with its lid up, represents her as no concertgoer has ever seen her. The wild disorder of the hair has never been seen in a concert hall. (Yuja’s hair tends to stay in place throughout the most rousing of her performances.) And the foreshortened, oversized hand is an obvious deviation from the consensus we call reality. Will Yuja cringe when she looks at the photograph? Or will she see it as expressive of her impudent, defiant nature and find in it, almost hear in it, an echo of her incomparable musicality? Heh, heh, heh!

The New Yorker has this gift, when encountering someone they consider to be Really Important, of both sycophantically abasing themselves but at the same time sneaking in little things that tell their readers that This Person is Just Like You, obsessed with little material things like clothes and boyfriends and eating. About one third of the very lengthy article is, I kid you not, about Yuja's dresses. The caption to the photo reads: Yuja is keenly aware—as many soloists affect not to be—that she is being looked at as well as listened to. Oh yes, "as many soloists affect not to be!"

One piece that they do manage to talk briefly about is Beethoven's "Hammerklavier" Sonata that was featured in some of Ms Wang's recent concerts. That reminded me that there is a recent release of that same sonata on a CD by Grigory Sokolov. I immediately started imagining how a photo session with him might have gone.

"Grigory, Grigory! What are you going to wear for the photo session?"
"What do you mean, what am I going to wear? What I always wear in my professional life, white tie and tails."
"Oh no, not again! Grigory, don't you realize, it is the 21st century. We have to be aware of how the audience sees you, relates to you physically."
"Look, I'm a pianist, not a movie star or a body-builder!"
"That is so not the point. We need to up your sales figures and it is just a fact of life nowadays that your sexual persona is extremely important in how you project your image."
"My image?!? Who cares about my image? I'm a somewhat elderly, overweight Russian with weird hair! Once I sit down at the piano, who even notices what I am wearing?"
"The general public, my dear Grigory, the general public!"
"The general public doesn't come to my concerts or buy my CDs--it is the passionate music-lovers who do and I really don't think they want to see me in a slinky dress!"
"You might be right about that, but what about something casual and fashionable? How about something like this from Dolce and Gabbana? Very spiffy!" 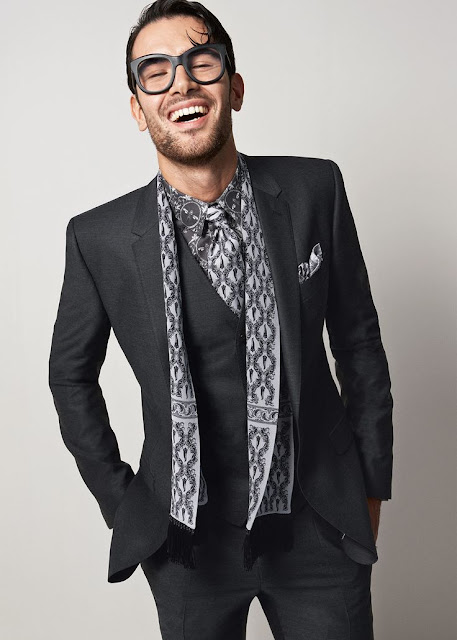 "I think not. I think I will stick with exactly what I have been wearing ever since I became a concert pianist. And no, I will not "pose" for the cameras! Just take the damn picture!" 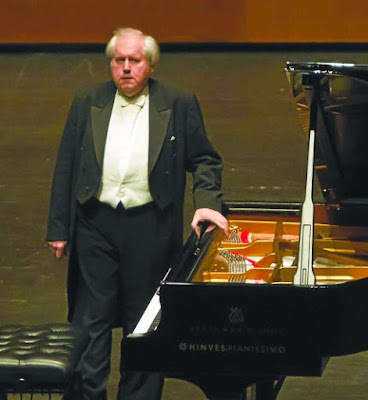