Valentina Lisitsa: "I Don't Do Crossover" 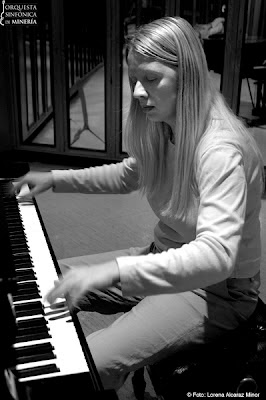 Valentina Lisitsa, whom I have written about here, is about to make a major breakthrough in her career. She is reported to be the most-watched pianist on YouTube (how does one confirm these claims?) and has just signed to a major label, Decca. On June 19th she will play a solo recital at Royal Albert Hall in London. Here is Norman Lebrecht's post on these events. Norman has another post up in which he mentions an interview that Valentina did on Sky News in which "she delivered a short, sharp putdown to the pseudo-classical industry." He doesn't seem to have a link to that actual interview. The first comment to Norman's post says, "Belittling the genre and alienating fans of classical crossover music is an incredibly stupid thing to do." I'm a little hampered here, by the lack of a link but in Norman's post title he claims she said "I don't do crossover." Is that belittling?


I think it is time for one of my barn-storming, damn-the-torpedoes-full-speed-ahead posts. I haven't put anyone down in just ages.


In my previous post on Valentina I said that what she presented was "alert, intelligent, purposeful musicianship." I think if you are that kind of musician, not doing crossover is pretty much inevitable. I put up a fairly lengthy post here talking about crossover. If you go read that post, I won't have to repeat myself.


Crossover seems to have no musical significance. It is a mere marketing tool, but your increased sales are paid for in aesthetic value. For a classical musician in order to get those people to buy your recordings or tickets who wouldn't normally, you have to pretend to be someone more popular. Crossover for a very popular artist like Sting is different as instead of piggy-backing his name onto John Dowland's he is instead using his fame to make Dowland more known. Crossover for a classical artist can be rather more aesthetically fatal. In my post on Dietrich Fischer-Dieskau I said, "a great artist like Fischer-Dieskau cannot sing trivial music." Why is that? If he, or if Valentina Lisitsa plays a 'crossover' piece it is either because they are pandering to the audience, in which case our respect for them as artists diminishes, or it is because they think it is a worthwhile piece of music, in which case our respect for them as artists also diminishes. It's a lose-lose proposition. Mind you, it is probably a case of losing a few listeners but perhaps gaining a lot more. Maybe not though: just because you decide to pander doesn't mean it will work. I once said to some friends that there are lots of classical musicians who would love to sell out, but nobody's buying!


Valentina Lisitsa is by all indications a fine musician. Part of being a fine musician is avoiding playing bad repertoire. 'Crossover' is bad repertoire. For her, I think, playing crossover would be an incredibly stupid thing to do because in the very first place the fans it would alienate, those who have viewed her 43 million times on YouTube doing good musical repertoire, are the fans that are the most important, because, unlike the crowd you might get by a momentary pandering, they will stick with her for decades.


What I look for in a musician is understanding of the music, ability to play it expressively, technical competence and conviction (believing the music is worth playing). Playing crossover seems to put much of this at risk.